With the right mix of minor to major functionalities, WordPress developers are building products for clients as well as for themselves. The most native procedure is, you develop a theme or a plugin locally and then host it somewhere. GitHub is that somewhere which has become a popular choice for most professional developers over the years. The fact about Git being preferred despite the WordPress core still using SVN for version control tells all the pros that are associated with it.

But let me remind you about a process which iterates each time you hand over the project to a client. I’m talking about the moving of project’s files onto the client’s server. The process is even more nerve-wracking when you have to do it manually via FTP. I’m sure you’re doing it for most of the time, and you consider it worth repeating.

WordPress’ integration with third-party tools and software are taking this CMS to a next level and is not new. Unlike, several other such developments, there aren’t many tools which allow an easy integration of Git-managed themes and plugins with WordPress. In such a scenario, the existence of the WP Pusher plugin is quite a genius move.

Peter Suhm, the lead developer, describes the plugin functionality as:

Pain-free deployment of WordPress themes and plugins directly from Git.

In other words, the WP Pusher plugin provides developers with one of the possible ways to sync WordPress themes and plugins directly from GitHub, Bitbucket or GitLab to the client site. It is just another WordPress plugin which frees you from the hassle of copying files over FTP/SSH. So, in my opinion, it will be unjust if I don’t say that WP Pusher provides a captivating experience of Git with WordPress.

Getting Started and Configuration

Unlike several other WordPress plugins, WP Pusher is not available in the repository. However, the free version can be downloaded from its website. Once downloaded and installed, you can start managing all your GitHub hosted projects from one common place i.e. the dashboard.

I am initially reviewing the free version, so the main settings page inquiring about the license and token details are not much of a concern. However, when one is dealing with private repositories, he’ll surely fill up these details by accessing the Pro version. 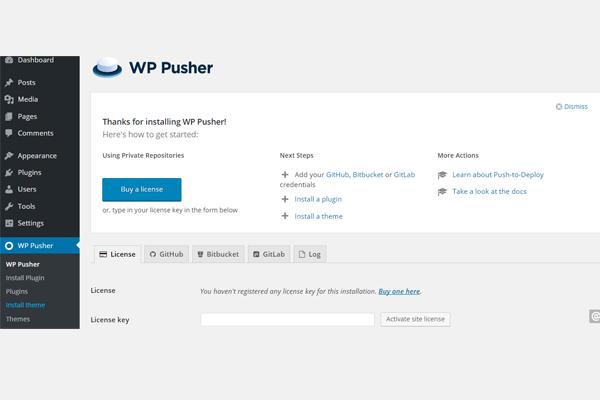 Next, click the sub-menus of “Install Plugin” & “Install Theme” and start adding your theme and plugin repositories instantly via the main menu for “WP Pusher”. The process involves the configuration of a few basic fields like paths of your repositories (e.g. GitHub, BitBucket, or GitLab), links to plugin and theme’s branch or folder, etc. These simple options make the plugin lightweight and easy to use. 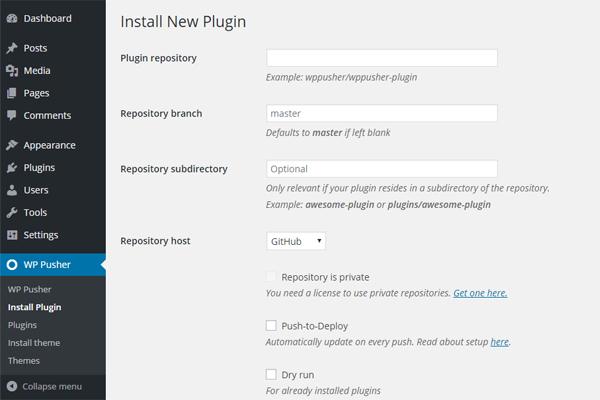 One of the key highlights of this plugin is its Push-to-Deploy feature. The tiny miny, checkbox which appears on both the install plugin and theme page automatically updates your project the very next moment you push your commits to GitHub. This means no fuss of updating and maintaining newer versions manually. 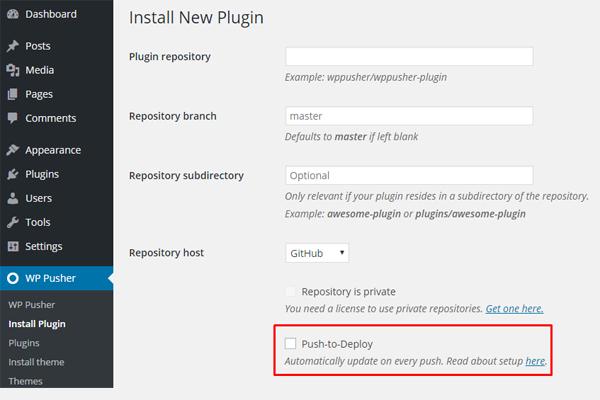 The team behind this project developed it as an auto-updater in WordPress which gets synced and start working when you push your changes. Then a series of rundown actions starts which begin with a POST HTTP request sent via GitHub to the “Push to Deploy URL”. Next, GitHub webhooks assist WP Pusher in updating any plugin or theme repo. To create one such webhook, go to Settings > Webhooks & Services > Add Webhook.  Paste your Pust-To-Deploy URL here and save the settings.

Overall, the plugin seems to be great as it offers possibly the best auto-sync solution between GitHub and WordPress. So, there’s no point in troubling yourself with the manual handling of client’s files. I’ve tried it with a few plugin repositories, and everything worked perfectly well. WP Pusher is available at an affordable price ranging from $39 to $199.

So, what are you waiting for? Grab a license for yourself and make a perfect addition to your developer’s plugin stack. Have you tried WP Pusher before? Share your experience and views about it. You can post below or reach me out through Twitter.