It’s been less than a week since the most anticipated and talked about version of WordPress 5.0 got released. The core software now comes packed with an all-new writing experience called the Gutenberg Editor along with the default TwentyNineteen theme. The good news is that WordPress is embracing JavaScript, React.js which means we are heading towards modern web standards.

During this entire year, we saw WordPress community speculating about Gutenberg. Some spoke about its highs while others kept on negating this idea and showed strong criticism. But considering the competition which other CMSs offer, major updates to WordPress were crucial. And Gutenberg is an excellent upgrade.

WordPress 5.0 or the Bebo as the version name goes is definitely the face of what I call as the Next WordPress. WordPress developers/agencies have already spent this year while investing all their energies in making their product Gutenberg compatible. Now Gutenberg is formally announced which marks the beginning of a new test which product owners have to go through and offer the best to their audience.

Some time back we published a case study here at TheDevCouple featuring how WordPress plugins are adopting Gutenberg and we mentioned Gravity Forms since this plugin is one of the early adopters of Gutenberg.

Being such a loyal support we’ve decided to once again let our readers and Gravity Forms users know how the launch of Gutenberg will impact this plugin. In this article, I will try to address all the possible queries which its users have. So, let’s begin. 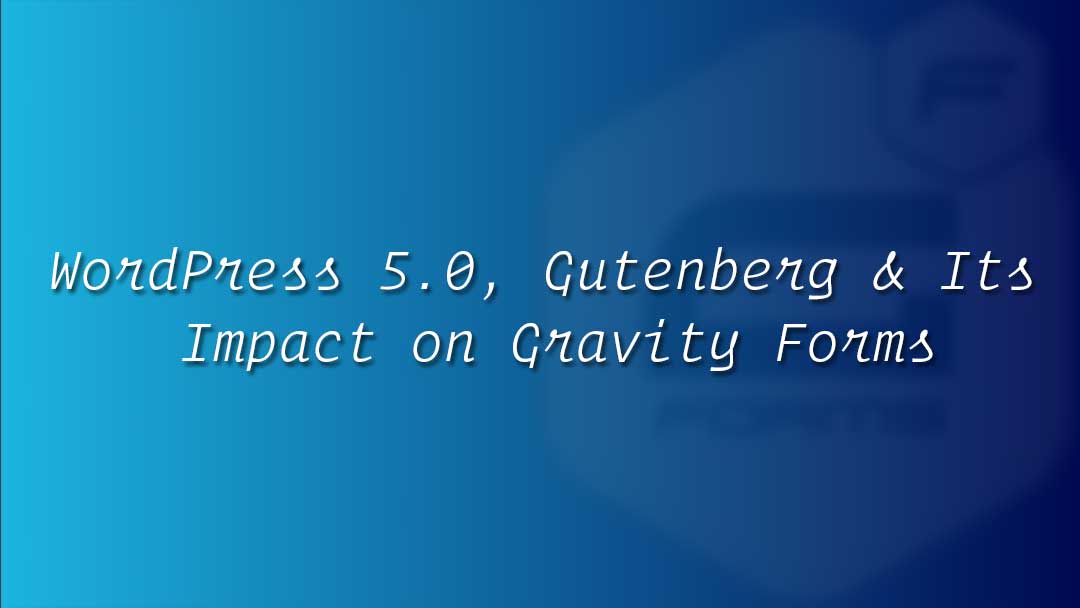 At the time of writing this article, we didn’t witness any major changes while installing the standard version of the plugin. We created a form and experienced the same form creation and editing process.

In case you are looking forward to learning how to create and edit forms using the Gravity Forms plugin then you can go through this in-depth and extensive review which highlights all the key features, functionalities and working of this incredible form plugin.

When it comes to talking about upgrades in the Gravity Forms plugin after the Gutenberg launch then, we came across a few changes when you tried embedding forms into posts or pages. The Add Form button which helps you create a new form is not in its previous place and the reason is pretty obvious i.e., the default WordPress post editor is being changed because Gutenberg is here.

Previously, when you click the Add Form button you would select a form and its options. You’ll get a shortcode for that form and you insert the Gravity Forms shortcode into your page or post.

Since we have an altogether a new writing editor, the button will no longer be there.  So, now the Gravity Forms users will be able to embed form by using the following methods:

There are literally tons of form builder plugins in the WordPress ecosystem. But when it comes to considering the factors like support, reliability, scalability, security, spam fight and usability Gravity Forms is one of the plugins which can’t be just ignored.

In fact, Gravity Forms is something far more than just a form plugin. A great piece of software engineering paired with tons of features and possibilities. Being one of the most go-to form plugins the good folks at Gravity Forms make sure that they pace up with the changing standards in WordPress space. Which clearly speaks their inclination and support for Gutenberg.

Despite Gutenberg’s launch, it is still in its development phase and still many more changes are bound to happen. So right now the team at Gravity Forms is keeping their Gravity Forms Gutenberg Block optional and are not merging it into the core plugin. But this does not mean they are backing off their support. They are keeping well with their users’ expectations till we witness a stable and fully matured version of Gutenberg.

⁉️ What’s Next for the Gravity Forms Users?

The details which I’ve mentioned are in no way to discourage you. Instead, at this moment the best process will be to update your sites to the WordPress version 5.0. Since the release is not only about Gutenberg. The release team has worked very hard in bringing updates which improves not only the writing experience but also the stability and security.

If you are not ready for this major shift then instead of not updating your sites, you can use the old post editor by installing the Classic Editor plugin.

As far as the Gravity Forms is concerned, then it will still work the same as before, irrespective of which editor you are using. The only difference is the location of the Add Form button when using the Gutenberg editor.

I am quite hopeful that as the Gutenberg will become better and bigger Gravity Forms plugin will cater its users accordingly since I believe that Gravity Forms have undoubtedly ranked at the top few positions when you are asked to name the popular form building solutions out there. The reason is straightforward that all their products are not only feature-rich but are also up to date.

Finally, it’ll be a good read for you In 2018 and Beyond Why We Think Gravity Forms Is Here to Stay!

In 2018 and Beyond Why We Think Gravity Forms Is Here to Stay!