If you are into plugin development, you’d always be interested in gathering data about where your plugin is being used. Unfortunately, a significant disconnect exists between plugins and its users in the WordPress.org directory. There’s a new plugin in town which has got this problem covered. It’s called the Wisdom which is a product by Catapult Themes.

To talk more about it, today we have Gareth — the man behind both Wisdom plugin and Catapult Themes. He’ll be sharing his WordPress story about the Wisdom plugin with us. 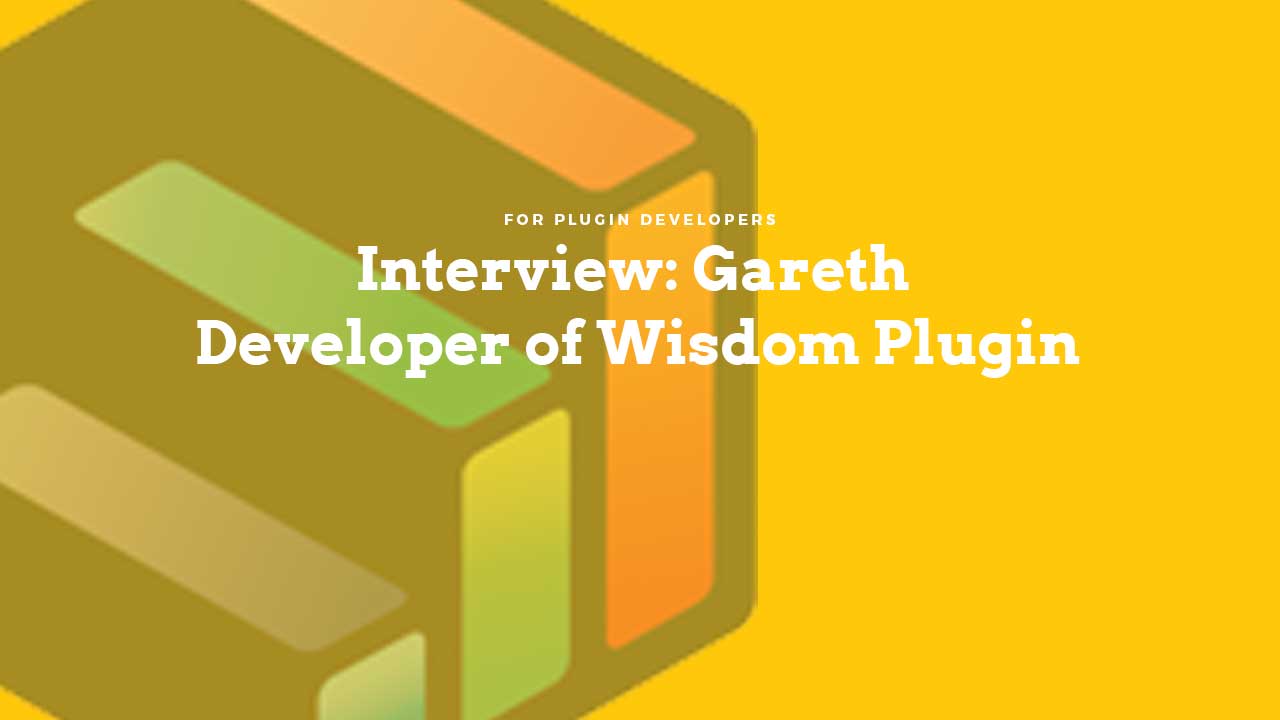 Hello Gareth, thank you for joining us today. Let’s start with the basics first! Can you tell a bit about your background, and what are you working on? What do you call yourself nowadays? Tell us about the business transitions and job titles you have had since you started working with WordPress?

Thanks, Maedah – I appreciate the invitation to take part.
I’m based in the UK, and I’ve been working with WordPress since around 2008/2009. I suppose I’d call myself a developer. Though, I’ve also designed a lot of themes for clients, both in WordPress and with a couple of the e-commerce platforms. Before I got involved with WordPress, I was working in online training, employed by a large company. But I had a young family, and I wanted to be able to spend more time with them – plus I very much wanted to work for myself (I’m not very good at people telling me what to do…).
Given that I had a technical background, web development seemed like a viable field to start a business in. When I started looking around at platforms, WordPress was the obvious choice. I can still remember the first time I loaded it in a local install and began to play around with the Kubrick theme. I felt genuinely excited to have found it.
Initially, my work was mainly creating custom sites for clients, and I continue to do this. A few years ago, I built an online training platform, using WordPress, which sells online health and safety courses. I’m still running this as a side business.
As time went on, I started to look more at plugins and themes and their commercial possibilities. I found that building bespoke client sites is time-consuming – and single-use. I might work full-time for a couple of weeks on a project without time to do anything much else. And once the site is built there’s not much more I can do with, whereas when you build a theme or plugin, you can sell it multiple times. When I started, I knew that I wanted to have several income streams rather than relying on a single source of income. But while doing a lot of client work, it’s difficult to find time to create longer-term opportunities for income. I’m still very much occupied in trying to get this balance right.

You’ve mentioned that before Wisdom there was a major “Discontent” and “Disconnect” between developers and their users. What made you fill this gap? What was the motivation behind it? Would you like to share the story?

I’m not sure I ever used the word ‘discontent, ‘ but for certain I think there’s a disconnection for plugin developers once their product goes out into the wild, particularly if you are distributing via a platform like the WordPress.org directory. Having released several plugins through the directory, I often found myself scratching my head looking at the stats, wondering why some people continued to use a plugin and others didn’t. The amount of useful information for a developer there is zero.

I built Wisdom because I wanted to know more about what was happening after users installed one of my plugins. And I very much wanted to know about any problems so that I could fix them. When you consider the kind of industry that we’re in and the amount of data available to us for just about everything we touch, it’s incredible that necessary data like this isn’t more readily available.

What are the biggest challenges you’ve faced? What are your Platform’s biggest advantages? Was anything particularly helpful?

I think one of the challenges I have been most aware of is that I’m writing a plugin that’s going to be incorporated into another developer’s plugin. So, I’m very conscious that what I do is going to be perceived by the end user as part of the experience for someone else’s plugin. I want Wisdom to be almost invisible to the end user.
On the other side, I’m using Wisdom in my plugins and see its advantages first hand. Since I started using Wisdom on a couple of projects, I’ve collected data on around 25,000 websites that have one or more of my plugins installed. I’ve been able to start drilling down on reasons for deactivation and therefore make improvements. An example of that is a Discussion Board plugin that I have where users were giving the main reason for deactivating that the set-up was too complicated. I automated some of the set-ups in a new version, and the deactivation rate fell. The knock-on effect then is that more people continue using that plugin – and more people choose to upgrade to the Pro version.
I’ve also been able to use the data to troubleshoot support calls when users are unable to provide technical information – that can be a big time-saver when something like PHP version is critical, and the end-user is not technical.
Perhaps one of the biggest advantages of Wisdom is that the data it returns also includes the email addresses, collected by permission, of the people using your plugins. This is an amazing way of building a targeted mailing list. In around 5 months I’ve built a mailing list of around 25,000 names.

Freemius is your direct competitor. How are you ensuring business growth? What marketing strategy you guys adopted to make room for your product? How have you attracted users and grown Wisdom plugin?

The big difference between Freemius and my product is that Freemius is SaaS and mine isn’t – it’s just a standard WordPress plugin that you add to your site. I chose to do it this way because it made sense to me, as a plugin developer, to have my data in one place. On my site, I can view my sales, user licenses, maybe Google Analytics data via Monster Insights, and I also wanted to see tracking data for plugins as well. I prefer that to having to go off to another site with another log-in and view the data there but, that’s a personal choice, and I can completely see that other people might prefer to work with SaaS.
As far as room is concerned, I’m sure there’s space for more than one solution – there’s a lot of developers out there. Several of the bigger plugins, like Yoast and WooCommerce, have their tracking systems. It seems to me that anyone with a plugin would want to have similar, just not everyone has time to build it themselves.

How does your business model work? What’s the story behind your revenue?

I use the typical methods for bringing in customers, including the freemium model where I have free versions of plugins on WordPress.org with pro versions available. I also try to write more blog posts, particularly around technical stuff that will bring interest to other developers. Although I think that I have a reasonable grasp of many different disciplines involved in running a business. I have to confess that I find marketing and promoting products far less enjoyable than creating them.
Regarding revenue, the business is not yet where I want it to be. I’m still working on getting the balance right between the jobs that pay now against spending time on projects that are going to pay out over time. I’m pleased and secretly amazed that I’ve managed to earn a living for the last 5 or 6 years purely from my efforts and not having to rely on receiving a wage cheque from someone else. But there’s plenty more that I could be doing.

How difficult was it for you to bring in the first 100 customers?

The road to the first 100 customers is not an easy one. However, I think that the first customers are always the most difficult ones to acquire. Once you start building a customer base, then you can generate some momentum.

How old is Wisdom plugin?

I released Wisdom at the start of March this year. I’ve spent the last five months using it on several of my plugins, collecting data so I could see how it was working in a live environment. I released a new version last week that improves the efficiency of the reporting system. I found that I collected enough data which was sufficient to improve performance. I’m now working on the next version, which will include integration with MailChimp so that every time someone installs one of your plugins, they can be automatically subscribed to a MailChimp list. This version should be out next week.

What are your goals for the future, and how do you plan to accomplish them? What’s your advice for new WP Business owners who are just starting out?

Goals for the future certainly include figuring out the answer to the jobs now/income later dilemma. Personally, I also want to be able to spend more time working in interesting places around the world. The UK doesn’t have enough sunshine for me, and I think it would be a great experience, especially for my kids, to spend time in different parts of the world. Though I guess a swimming pool looks much the same wherever you are.
When I started working for myself, I decided to have multiple sources of income so that if something didn’t work out, I still had something else to fall back on. So my advice to anyone just starting out is not to put all your eggs in one basket unless you can see into the future. Seeing into the future would be a great skill to have.

Where can we go to learn more about you and your business?

To find out more, you can go to the usual places:
Website: https://catapultthemes.com
Twitter: https://twitter.com/CatapultThemes
Email: [email protected]

Wisdom plugin is only 5 months old, and Gareth is looking forward to improving it both in terms of functionality and reach. He’s quite hopeful that the plugin influences the lives of the plugin developers as it has influenced his. I wish all the best for future.👍

Also, he has been kind enough to offer a 25% discount for all the WPCouple readers. You just need to use code WPCOUPLE at checkout.

Thank You, Gareth, for taking part in this whole thing! If there’s anything, you’d like to ask him, post in the comments section below. He’ll reply back! 😎