WordPress 4.9 Tipton just got released, here’s a post about what’s new in it.

🎩 Here at WPCouple, every team member contributes to WordPress. As you can imagine, we are super passionate about the WordPress software and its community. We live and breathe WordPress, build WP products with it, and give back to the make it better. 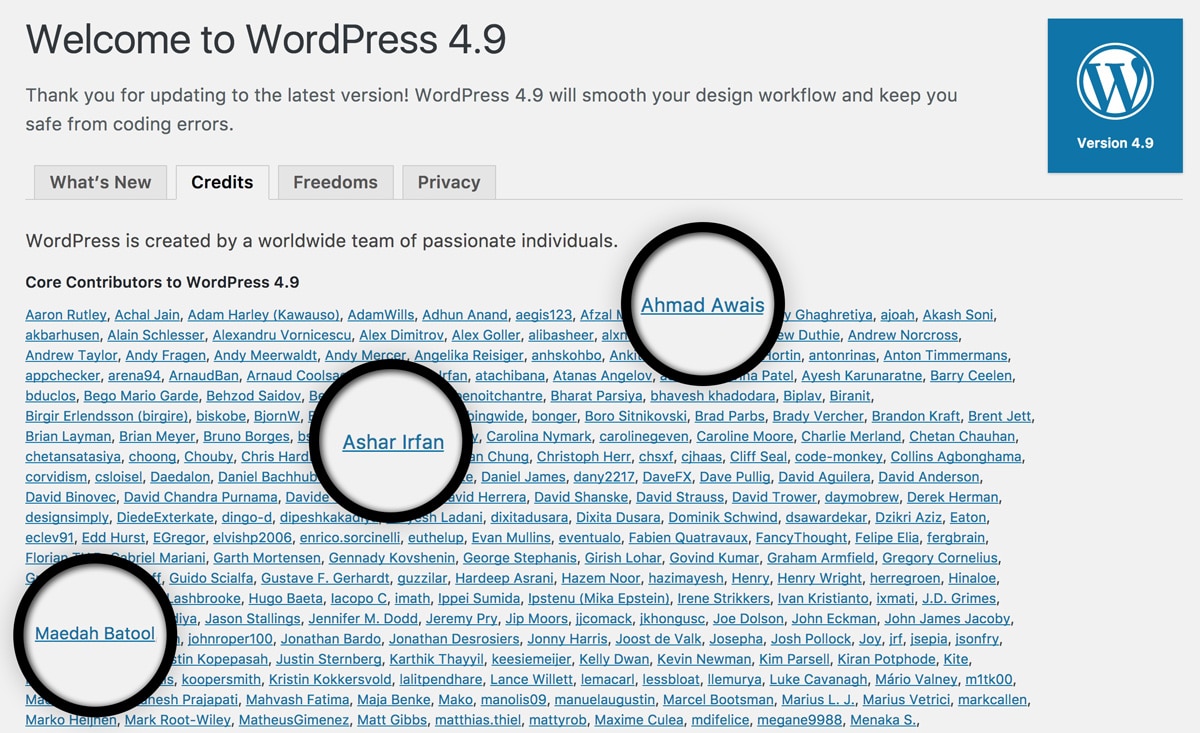 🔥 Ahmad Awais is a regular WordPress core contributor, he contributed to WordPress 4.9 to improve the Customizer widgets’ CSS for small screens, building the default themes changelogs, and improved upon the consistent error message screens for plugins and themes.

🚀 Maedah Batool started contributing to the core in 4.8 and also contributed to 4.9, she’s the best technical writer I know of, she wrote the changelogs and improved the Codex as per the WordPress 4.9 release — esp. for default themes.

📦 Ashar Irfan, on the other hand, will become a core contributor in 4.9. He improved the core’s CSS for different areas in the customizer from default HTML widget to adjusting the background and alignment of various buttons and the Gallery widget.

🎩 Saqib Ameen contributes as the General Translation editor of Urdu language for WordPress. Because of him and over 150 contributors, we get 100% Urdu translated WordPress release since WordPress 4.7.

I’d like to thank my incredible Open Source Partners who help me and my team give back 30% to 50% of our time. To help improve the WordPress software and its community by WordPress core contributions, maintaining over 70 Free & Open Source Software, as well as by building the community itself among other things. Thank you! 💯 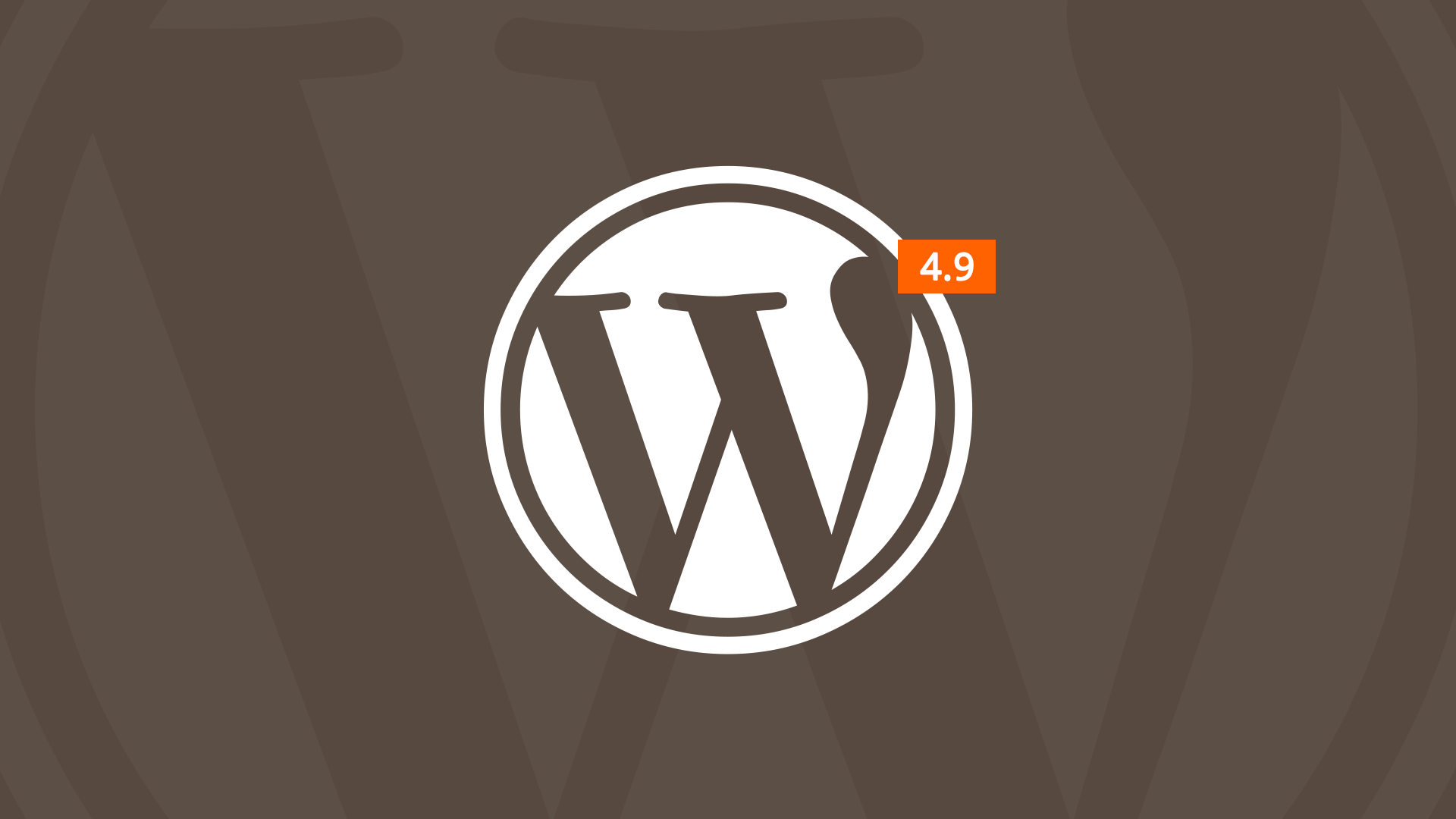 Some of the exciting new features which you will find in WordPress 4.9:

WordPress 4.9 allows you to create a draft and schedule changes in the customizer. It also generates a public preview URL. A user, not having access to the dashboard, can view the changes using a unique URL.

This is a huge update to the Customizer component. Huge props to all the contributors especially the Weston Ruter for leading this effort.

Once you save a draft or schedule a changeset, it will auto reload the next time you open the customizer. You can continue changing it or discard it to restore to the original.

This update comes with a significant overhaul of the theme browsing experience in the customizer. Now, apart from installing themes, you can browse, preview and install themes directly from the WordPress theme repo through the Customizer.

It also offers useful filters to narrow down your search — cherry on the top. 🍒

Personally, I found this feature very useful. It saves you from the hassle of going back to the Themes section to install a new theme — and dealing with change of context. It is going to save a lot of time for sure,  and help users to experiment different themes at one time quickly.

Text widget now comes with an “Add Media” button and support for Shortcodes in WordPress 4.9. Visual Editor in text widget was introduced in WordPress 4.8. But you had to use HTML to insert the media. Now you can directly add media from your media gallery with Add Media button.

One very longstanding request—for over eight years—has been to support shortcodes in the Text widget (#10457). This is finally implemented in WordPress 4.9.

Using shortcode, you can do awesome stuff, like displaying products in the text widget using WooCommerce shortcode, or may insert a contact form right in your textbox using your contact form shortcode.

WordPress 4.9 introduces a new gallery widget. Using the gallery widget, you can display a gallery of your favorite pictures on your site.

You can also adjust the size of the images and number of columns of the gallery.

In WordPress 4.9, uses oEmbeds to support other video providers as well. You can only embed the videos from the URLs present in the internal whitelist. It’s a huge list. Now you can add your favorite TED from TED.com or maybe a Facebook video on your blog.

Version 4.9 introduces a CodeMirror editor in the theme/plugin editor, Custom CSS in Customizer, and Custom HTML widgets. It also includes support for linters to catch errors. It all adds up to a better experience while writing code in WordPress. 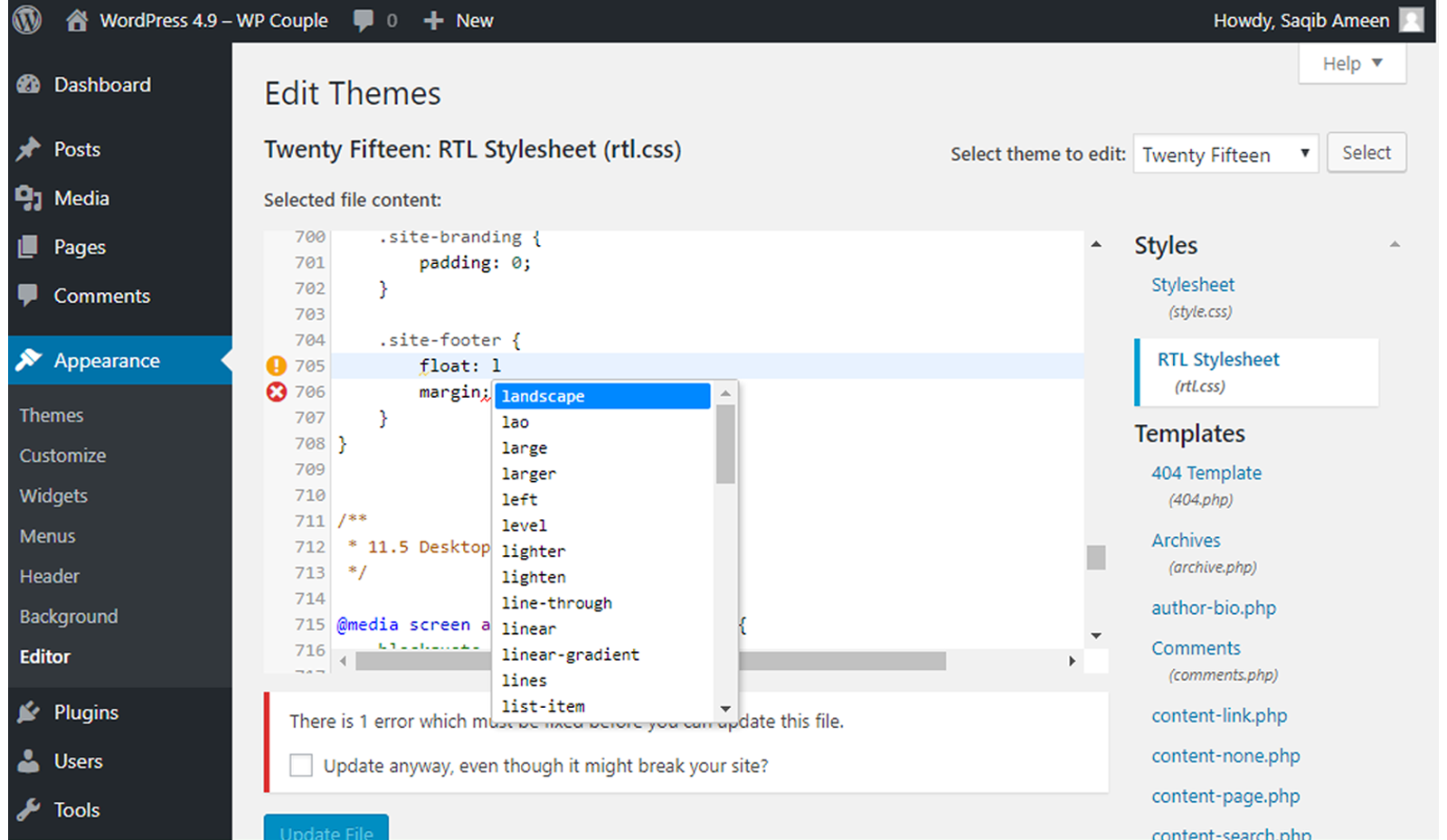 While it’s not a good practice to code live on the site but this does come in handy at times. Anywho, having this feedback, syntax highlighting, and the linter is a big plus.

When you edit themes and plugins directly, WordPress 4.9 will politely warn you that this is a dangerous practice. It will recommend that you backup your files before saving, so they don’t get overwritten by the next update. Take the safe route: your future self will thank you. Your team and customers will thank you.

You’ll also be able to avoid the dreaded white screen. You’ll avoid it when working on themes and plugin code because WordPress 4.9 will warn you about saving an error.

Unlike the previous versions of WordPress, v4.9 sends a confirmation email when a user changes his email address. This is a pretty good security feature.

WordPress 4.9 also plans to introduce several other new features for the developers. I have listed a few of them below:

But Wait, There is More! Roughly 400 bugs, 181 enhancements, 7 feature requests, and 42 blessed tasks have been marked as closed in WordPress 4.9.

This release was led by Mel Choyce and Weston Ruter, with the help of 443 contributors with props in this release, with 185 of them contributing for the first time.

Better user experience seems to be the point of focus of this update. To streamline the customization process, users should expect to witness some major changes in the customizer.

Make sure you backup your site before you update to a major version release like this one. I am pretty happy with the new updates. What do you think about these updates? Let me know in the comments!